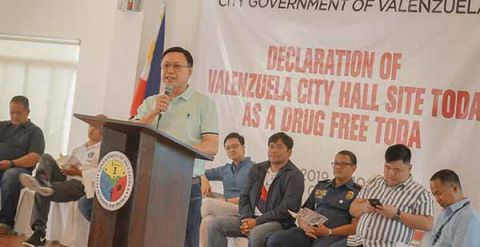 Balubaran-Mabolo TODA (BALMATODA) is awarded last November 20 at the Valenzuela City Town Hall as the Second Drug-Free TODA in the Valenzuela City — empowering cooperation among transportation groups to join forces with the local government’s fight against illegal drugs.

“Project Pogi” also leads the influence among drivers to represent the industry as not only for public transport but also for public peace, order and safety. The campaign aims to create trust between commuters and drivers and guarantee commuter safety, proving that the City’s public transport personnel are not into illegal drug activities.

In his speech, Mayor REX commends BALMATODA for showing that their group is disciplined, also saying that their passengers and commuters “will feel safe and will appreciate their efforts.”

Aside from the recognition, BALMATODA also receives a full HD LED television which can be used in the TODA’s terminal from VADAC.

As Valenzuela City rallies to eliminate illegal drugs in the City, the City Government promises to continuously tap the transportation sector to participate in its anti-drugs campaign.Francis Soriano